You are here: Home » Steve Conroy 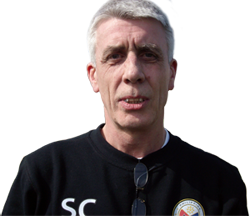 Having coached in the Philippines over a 10-year period for the P.F.F. (Philippine Football Federation) and forming a close friendship with Mari Martinez, PFF President, who I have coached for before and after his presidency, I have gained experience with the Filipino outlook on football.

My coaching experience has taken me all over the Philippines. Coaching for the PFF they included the Kasibulan soccer clinics teaching kids in provinces, other projects I have also been involved in are football for peace (P.R.A.M.A) which was held in Legaspi, Bicol, Ateneo and University of Mindanao, I was also Assistant Coach to Norm Parkin at De La Salle University (Manila) and First touch football Assumption College Makati for Mari Martinez.

A few years ago(2001), a project was discussed between Mari, Norm and myself about finding players with Filipino blood in the U.K. and nothing came of this until 2008 when our founder, Leo Jensen, located some Filipino players and a friendly match was played in Manchester.

It was not until Jan 2009 when things really kicked off, a meeting was arranged at the Philippine Embassy in London. All players were invited along with some national team players to discuss our aims for the future and planned trials.

After many weeks and hundreds of miles(we travel from Sheffield), we had 60 trialists which finally became 24. We then had the making of the Philippine United Football Club.

After joining West Hertfordshire League Div 2 we were on our way. Since then, we have gone from strength to strength all of this has been a dream come true for myself, Norm and the players.

Our future aim is the promotion and progress of younger players, hopefully one day we would like to open a soccer academy for the young ones and maybe a women’s team.

The future is looking good and to make this all possible, we need help from sponsors.